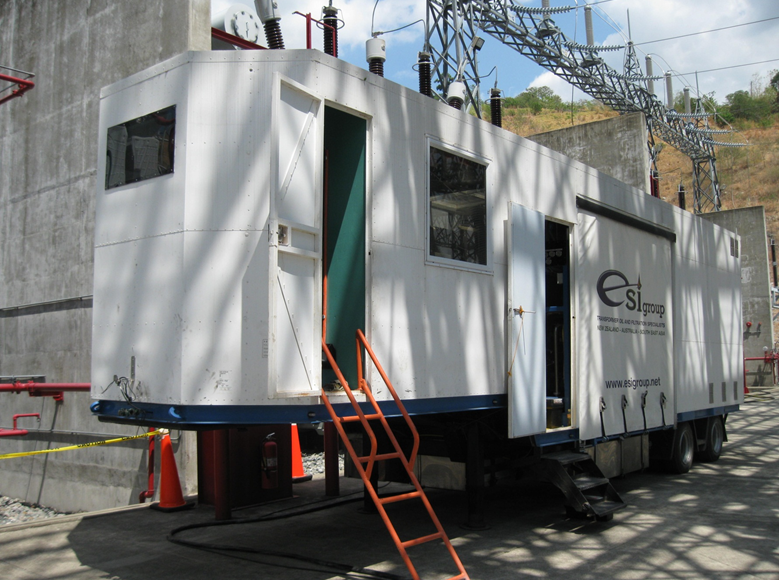 Transformers are the single most expensive item of high voltage plant in a substation. It is a recognised fact that deterioration of transformer oil, through either oxidation and/or contamination, can cause premature and at times catastrophic failure. Similarly oil will deteriorate at a greater rate as a transformer is operated at progressively higher loads.

Traditionally, transformers have been designed with reasonable overload capacity and conservatively loaded. Recent moves towards corporatisation/privatisation of electrical utilities, and the inevitable economic constraints that go with that, demand tighter design criteria and enhanced performance from network assets. Loading of transformers has increased with an attendant need to endure maximum integrity of performance.

It makes good economic sense, and gives confidence when loadings are increased, to regularly test and maintain transformer oil in good condition.

The normal aging process of a transformer results in sludge formation. It will appear faster in a heavily loaded, hot running transformer. The formation of sludge can be further hastened by the presence of moisture and free access to oxygen. Sludge builds up in progressive layers with varying degrees of hardness depending on how the unit has been operated.

Acids are first formed in the oil by the oxidation of its components, and the rate of build up of acid formation is an exponential one. After a significantly high concentration of acids has occurred they then attack the iron, copper, varnishes, paints and cellulose insulation. These materials coming into solution combine to form sludge.

Sludge then precipitates out of solution and forms a heavy tarry substance, which adheres to the insulation, the sidewalls of the tank, the core, and lodges in ventilating ducts and cooling fins. Sludges are also formed in the cellulose fibres of the insulating system itself.

Since formation of sludge is one of the prime causes for premature failure, it was imperative that a solution be found to remedy the problem.

Regeneration of oil and desludging of transformers has been carried out successfully in overseas countries for many years using a well proven technique of hot oil purging and filtering via Fuller’s Earth adsorbent bed. (Adsorption is the tendency of a liquid, gas or small particle to cling to the surface of another substance by physical rather than chemical means.).

Most of the contaminants in oil, including water, are polar in nature and are therefore easily adsorbed. There are several types of adsorbent material, the most widely used and accepted is Fuller’s Earth, with alternatives such as activated alumina and molecular sieves being less attractive and far more expensive.

Transformer oil itself can be reclaimed in one pass through a Fuller’s Earth bed of proper size and utilisation. Additional passes of hot oil redissolve decay products in and on the transformer insulation, core and coils, thus effectively scrubbing out the vital parts of the transformer.

The number of recirculations through the filtering system to accomplish internal cleaning of a transformer depends on a number of factors, including the:

It is recommended that hot oil cleaning should occur before an acidity level (Neutalisation Number (NN)) of 0.15mg KOH/gm and an Interfacial Tension (ITF) of 24dynes/cm is reached. These figures represent the maximum oil degradation beyond which the oil is unable to keep the sludges in solution.

When oil test indicate an acidity level greater than 0.3mg KOH/gm and an IFT less than 17.9dynes/cm, complete desludging procedures are required.

It is recommended that the desludging process takes place with the transformer energised – the mechanical vibration helps the hot oil dissolve sludges in the innermost recesses of the insulating system while the heat from the copper and iron losses aids in the general heating of the oil.

Mains Feature of the ESI System

Fuller’s Earth type LVM 60/90 which is commonly used in earlier technology oil reclamation systems, is not suitable for reactivation. Hardened grades such as RMV, Porocel and Tonsil can be reactivated up to 500 times. A number of grades of Fuller’s Earth are mixed in the ESI system to provide a balanced and optimum treatment of oil with respect to acidity correction, discolouration, improvement of dissipation factor and rehabilitation of many other properties.

The Reclamation plants used by ESI are known as mobile generation plants, they have multiple regeneration columns and flow rates of 1 – 6,000 litres/hr (MRP6) and 1 – 2,000 litre/hr (MRP2).

Reclamation, degassing and reactivation operations are all controlled by a programmable Logic Controller and monitored by a computer, which will be located within the plant. This high degree of automation ensures a maximum safety, reliability and simplicity of operation. All vital operating parameters are read, monitored and adjusted according to program, and stored on hard disk for retrieval as and when required.

ESI guarantee of oil quality on completion of reclamation would include :

New oil contains natural inhibitors, which are consumed during the normal aging process, and as a result reclaimed oil will oxidise, or age, at a faster rate than new oil. For this reason it is extremely important to add an inhibitor (the most common inhibitor being DBPC) to minimise the rate of oxidation of the reclaimed oil.

Independent studies by SD Myers and Hydro-Quebec have shown that optimum time to reclaim and re-inhibit oil is not at the time when the inhibitor has been fully depleted, but prior to the oil showing signs of aging as measured by acidity, IFT and other classic tests.

Ecology and the Economy

There are a number of very distinct advantages in reclaiming oil with a reactivatable Fuller’s Earth system:

All ESI plants offer a high degree of reliability with respect to spillage protection during operation. Any oil leakage from various interface devices such as relief valves, de-aerators, vacuum pumps etc, is monitored by level sensing devices and any spillage is contained within the fully bunded plants. If there is an indication of an oil spillage, the plants will shutdown immediately and automatically isolate themselves from the oil supply.